The event featured 26 different flavored wings, both dry rub and sauce, across 15 participating restaurants. Approximately 800 Wing Walk tickets were sold and nearly 600 attendees submitted their ballots, rating the wings they tasted from one to five stars.

Mayor Roach said, “With so many different flavors and restaurants to choose from, competition for the title of “Best Wings in Downtown White Plains” was not an easy choice. Congratulations to Delicias del Jireh/Peruvian Kitchen on their winner – Wings a la Limeña. I hereby declare April 25, 2022 Delicias del Jireh day in the City of White Plains.” 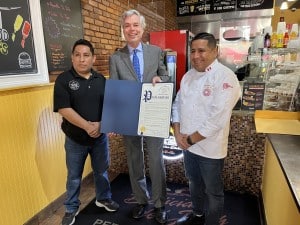 “The [winning wing] recipe was inspired by the fried chicken my mom made when I was in Peru,” Delicias del Jireh’s owner Nilton Mori explained. “Limeña means a person or item made it in Lima, Peru, where I was born.”

Wings a la Limeña was crowned best wing in Downtown White Plains for 2022 with a 4.3 out of 5 average. Past champions Lazy Boy Saloon and Ale House (2019) and Alex Lounge Bar and Grill (2021) were neck and neck for second place with their Tequila Lime and Cilantro Lime wings, respectively. The 2020 Wing Walk was cancelled. 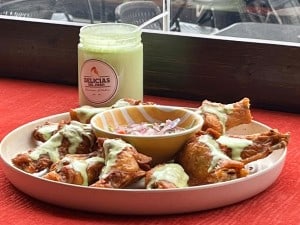